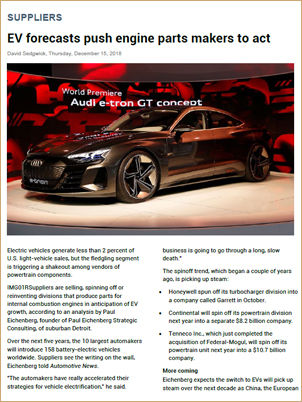 Suppliers are selling, spinning off or reinventing divisions that produce parts for internal combustion engines in anticipation of EV growth, according to an analysis by Paul Eichenberg, founder of Paul Eichenberg Strategic Consulting, of suburban Detroit.

Over the next five years, the 10 largest automakers will introduce 158 battery-electric vehicles worldwide. Suppliers see the writing on the wall, Eichenberg told Automotive News.